The second summit between US President Donald Trump and leader of the Democratic People’s Republic of Korea (DPRK) Kim Jong-un ended without any joint statement being issued, according to the White House.

President Trump has left the Mariott Hotel and is heading towards Noi Bai International Airport, bound for Air Force 1 and Washington DC.

The press conference ends. President Trumps leaves for the Air Force 1 to return to Washington DC

On the prospect of a third summit, President Trump says: "It happens, it hapens, but I’ve not committed.”

He says he will call South Korean President Moon Jae-in very soon on the plane from Việt Nam.

He has "given up" US - South Korea military exercises due to "high cost".

"I rather do it right than do it fast."

President Trump says there were many options but it's not good thing to sign a summit document.

It was about sanctions. He says Chairman Kim wants to denuke in less important areas than the US wants and sanctions issue was the dealbreaker.

"Chairman Kim has 'certain vision,' not exactly our vision".

But Trump says he wants to keep the relationship with the DPRK. He says it was very good, very friendly when he walked away from summit.

Mike Pompeo says US asked for more, but Chairman Kim was unprepared to do that. 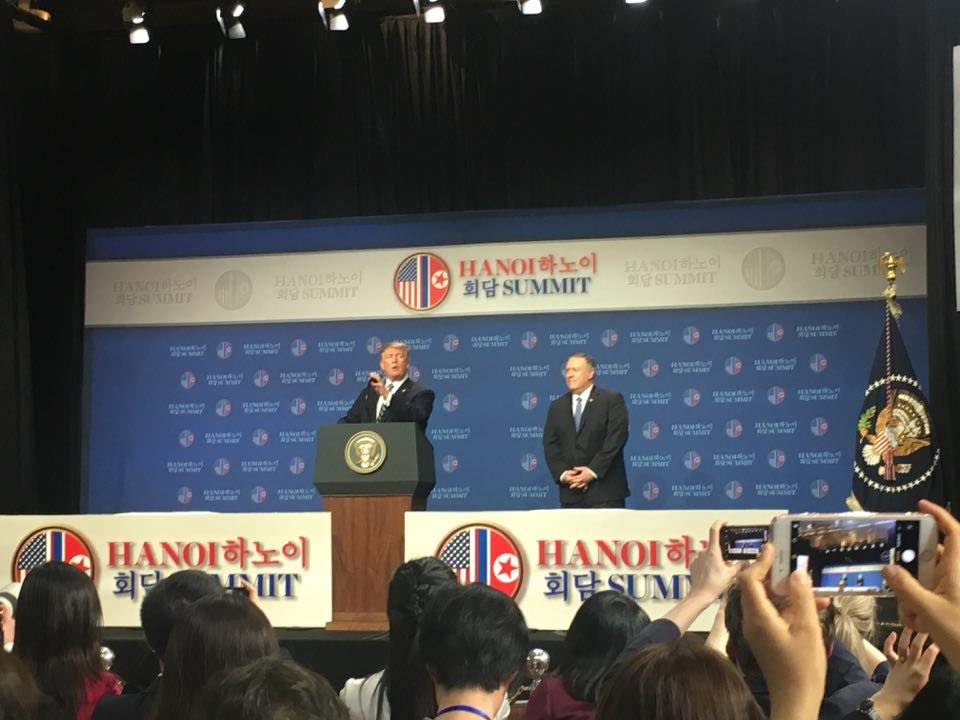 US President Donald Trump at the press conference

The White House has confirmed that despite "good and constructive" meetings, no agreement has been reached.

Reuters says no agreement has been reached

Jounalists are all waiting at the Marriot Hotel ahead of the press conference with President Trump. 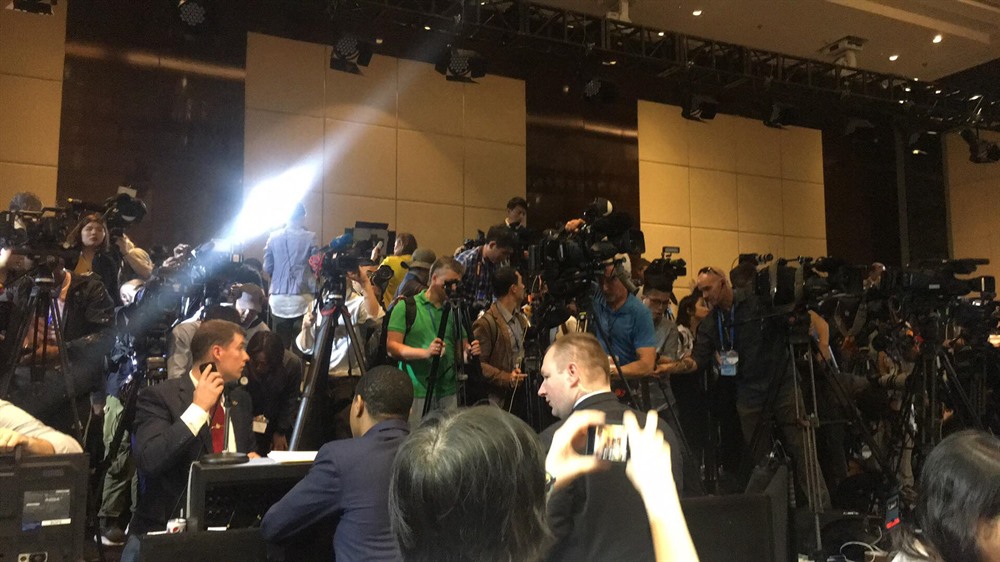 Chairman Kim has arrived at Melia Hotel. Here's the video:

The motorcade of Chairman Kim has left the Metropole Hotel. So did Trump. Both ahead of schedule.

President Trump is reportedly set to fly out on Air Force 1 after his press conference at Hanoi Marriot Hotel. 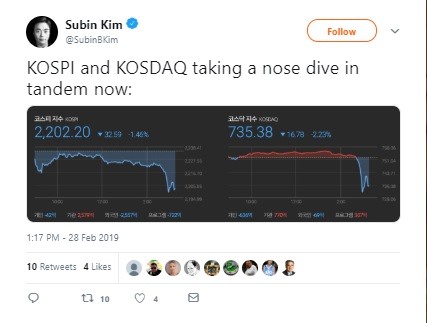 It seems that President Trump is about to leave the Metropole hotel soon. Here is the latest tweet from David Nakamura, White House reporter for the Washington Post.

Here's a photo of the dining room at the Metropole hotel where the two delegations were expected to have lunch. They never showed up. Sarah Sanders, the White House Press Secretary told media that the lunch had been cancelled. 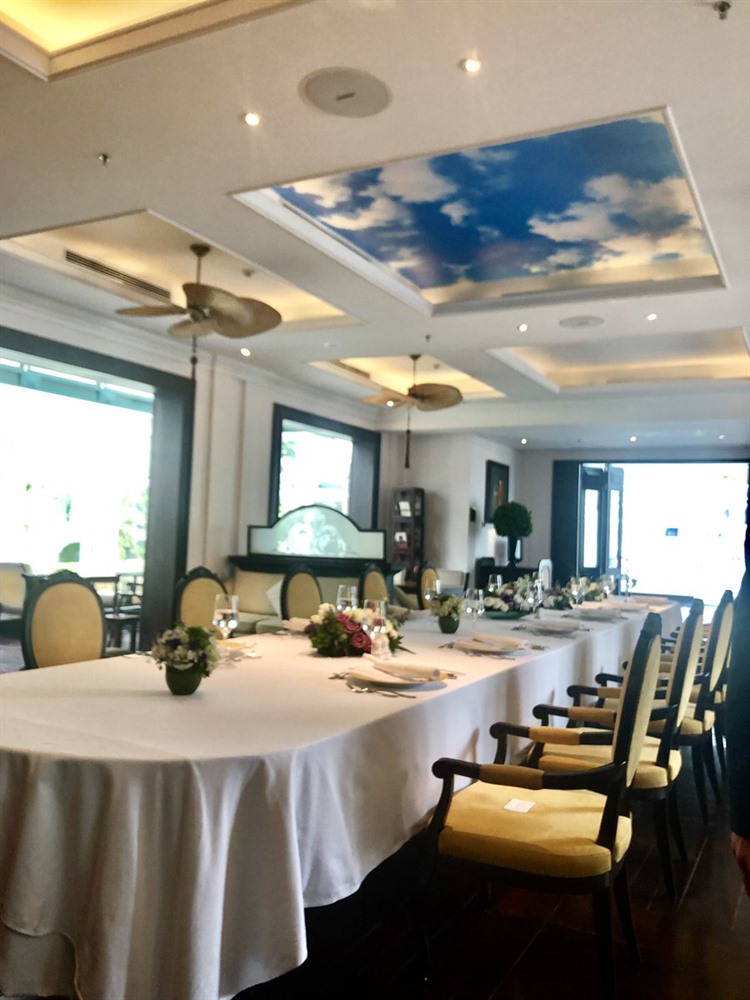 And here is the menu they would have enjoyed had the lunch not been cancelled: 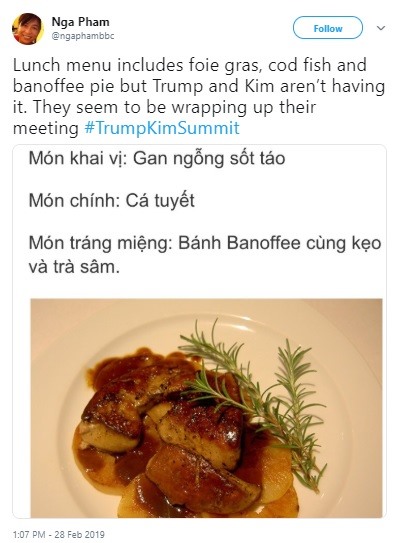 Here's the latest email from David Nakamura of the Washington Post. 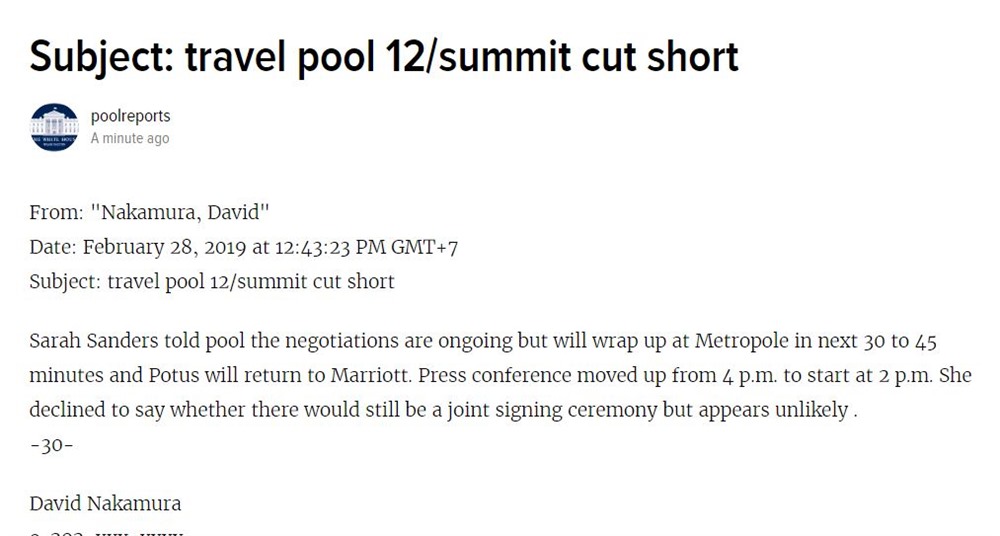 BREAKING NEWS: A change of plans for today’s schedule. The press conference has been brought forward and will now be held at 2pm at the JW Marriott Hotel. Washington Post pool reporter David Nakamura has just broke the news with this tweet. 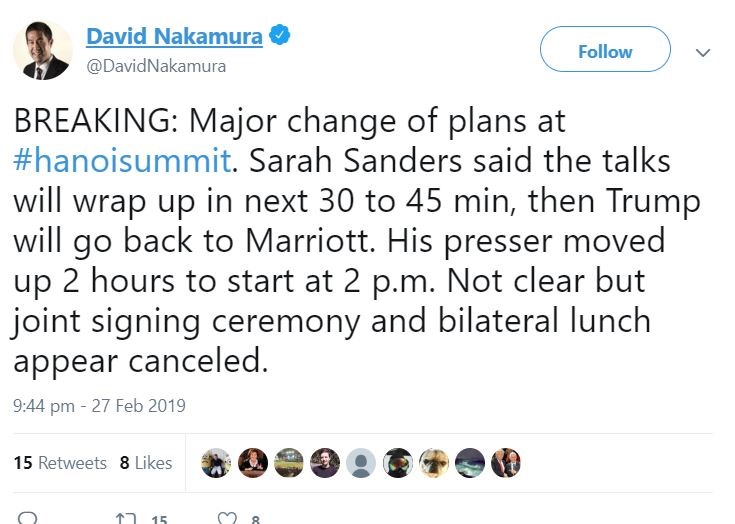 Is this a queue for free bowls of pho? Nope, it’s a security check at the Marriott Hotel. Reporters are having their bags searched ahead of the press conference later today. 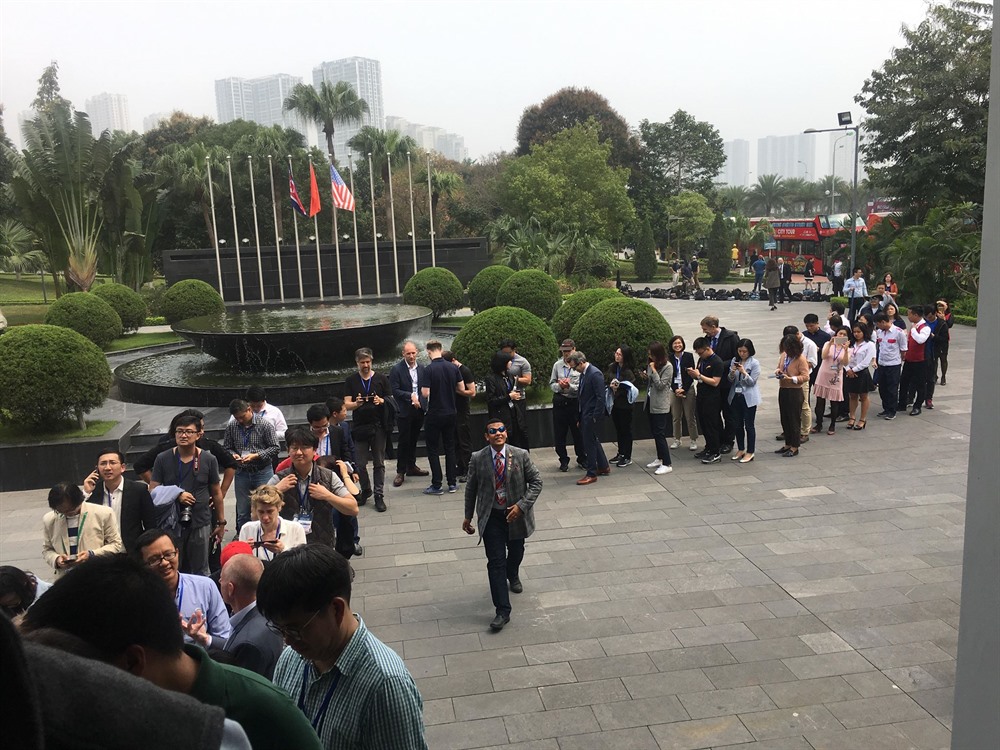 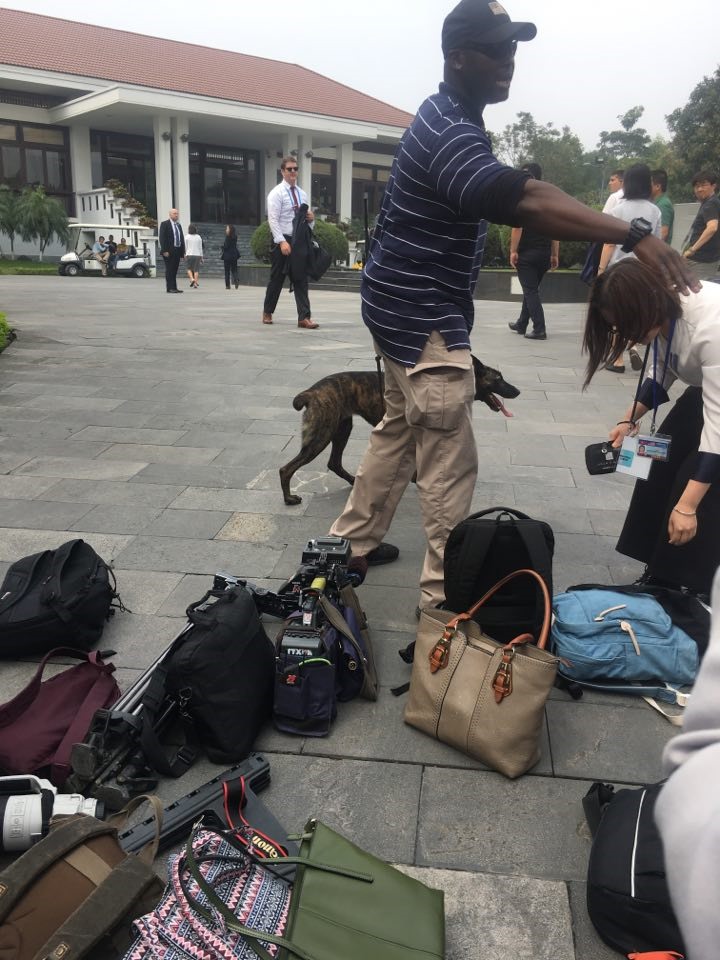 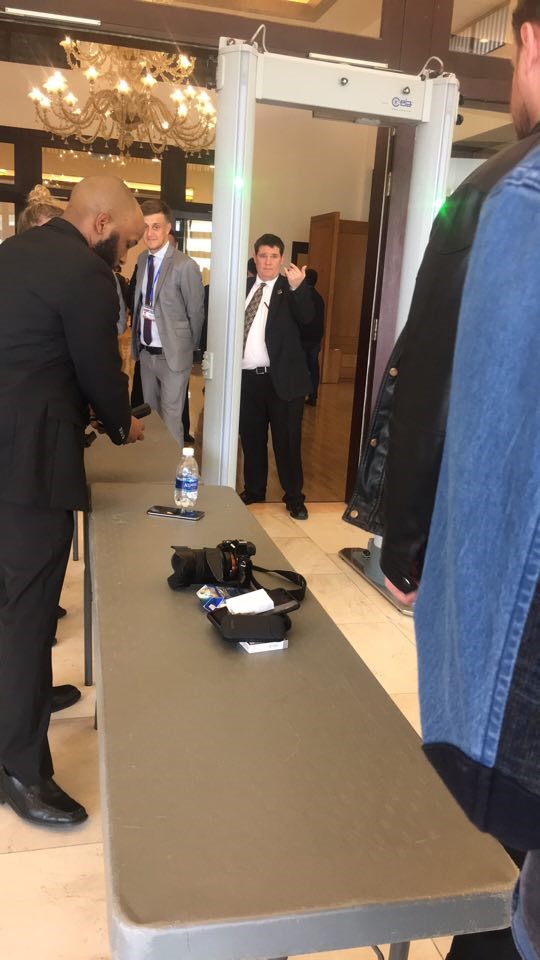 Chairman Kim and President Trump are going to have to wait a little longer for their lunch. We’ve been told the meeting is running late so it will be at least another 30 minutes before the leaders can sit down for something to eat. Here’s an email from pool reporter David Nakamura of the Washington Post.

Ever wondered what a high-powered meeting between President Trump and Chairman Kim looks like? Well here you go. This photograph was taken in the past hour inside the meeting room at the Metropole Hotel. 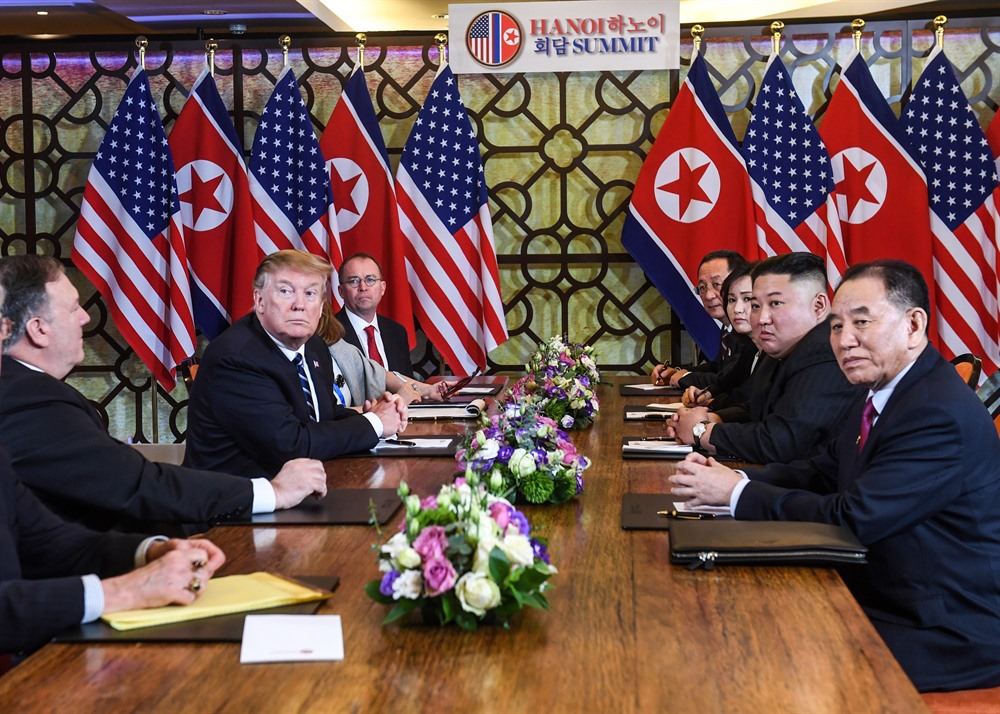 A trip to Vietnam just wouldn’t be the same without a nice bowl of pho. And that’s exactly what the worldwide media are tucking into right about now. It's proving so popular at the media centre there's even a queue forming. Wonder what Kim and Donald are eating for lunch? 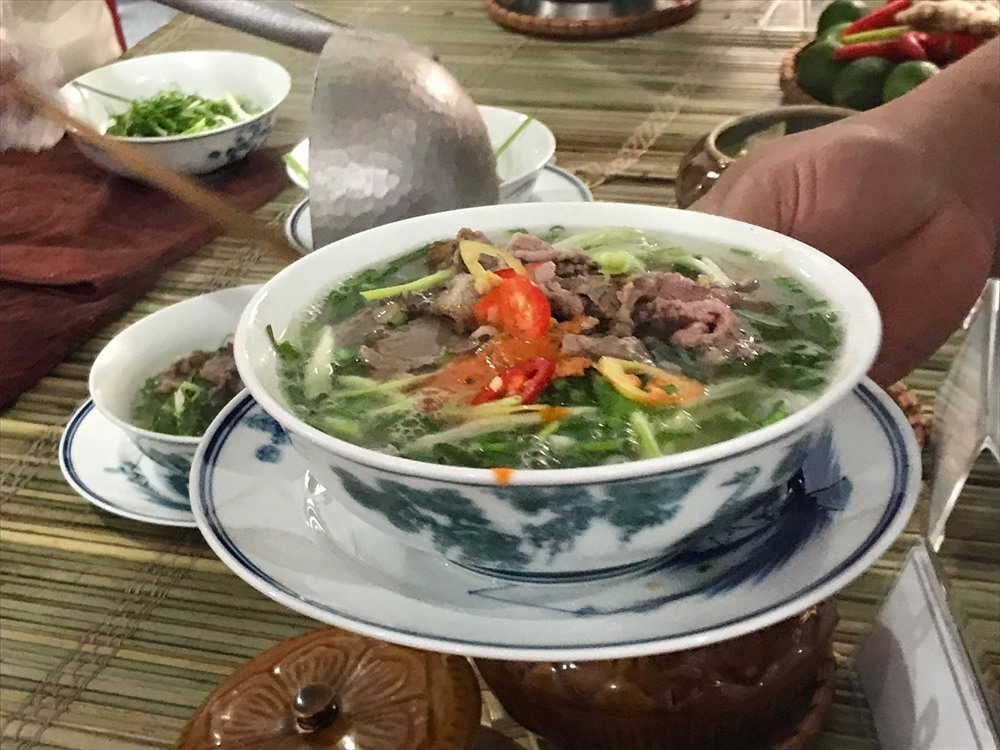 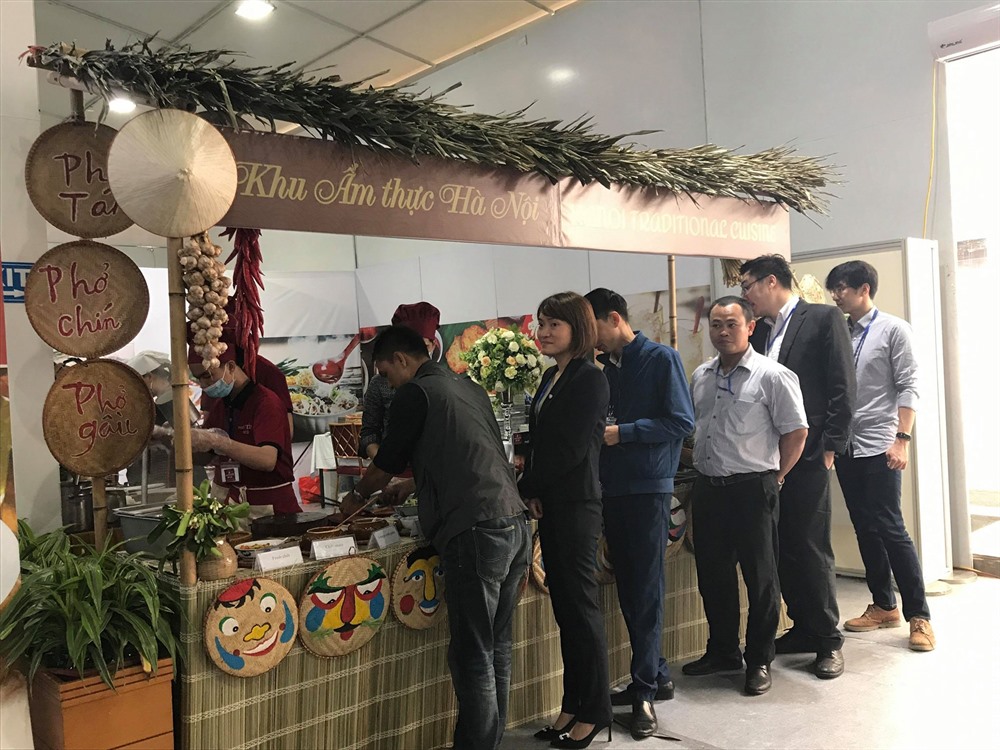 President Trump has scolded one reporter for ‘raising his voice’ to Chairman Kim.

Reporter: “Are you willing to take concrete steps to denuclearise or not quite yet?”

Kim: “That's what we are discussing right now.”

Trump (to journalist): “Don't raise your voice please, this isn't like dealing with Trump.”

Kim: “They all seem to be anxious.”

Here's the video of the latest quotes 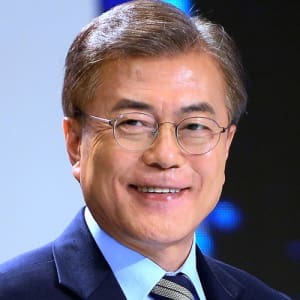 South Korean President Moon Jae-in will unveil the details of his new proposal for the future of the Korean Peninsula on the 100th anniversary of the March 1 Independence Movement, a Seoul official said Thursday.

The announcement, coming one day after a second North Korea-U.S. summit, is expected to focus on future economic cooperation between the two Koreas and Seoul's commitment to playing a leading role in the process.

Chairman Kim says he wouldn't be in Hanoi talking to President Trump if he wasn't willing to denuclearise.

“If I'm not willing to do that (denuclearise), I wouldn't be here right now.”

Asked about the possibility of opening liaison offices, Trump says: "I actually think it’s a good idea, both ways."

Adds Kim: "I think it’s something we should welcome…I think we need more time to talk."

8.41 AM – US President Donald Trump arrives at the Sofitel Legend Metropole Hotel in the Beast for the meeting with Chairman Kim Jong Un, who arrived minutes after.

9.04 AM – The two leaders spoke to the press before their meeting.

Trump: “I have been saying very much from the beginning that speed is not important to me. I very much appreciate no testing.”

Kim: “We’ll sit together and have a wonderful dialogue and I will do my best to bring about a wonderful result today.”

“It’s too early to tell but wouldn’t say that I’m pessimistic. For what I feel right now, I do have a feeling that good results will come out.”

9.44 AM President Trump and Chairman Kim enjoyed a relaxed stroll around the garden of the Metropole Hotel.

9.53 AM Korean body language experts reckon Trump and Kim are copying each others’ hand and arm placements. Notably, today was the first time ever Chairman Kim has answered questions from foreign media.

Dennis Rodman, the flamboyant former NBA champion and buddy of Chairman Kim, has gotten in on the action. He’s written a letter to President Trump suggesting he could be in line for a Noble Peace Prize (Trump, not Rodman!)

Here's the moment the two leaders chat during a stroll around the gardens of the Metropole Hotel.

Body language experts in Korea have told the media over there how Trump and Kim appear to be copying each others’ hand and arm placements.

It's also worth pointing out this is the first time ever Chairman Kim has answered questions from foreign media. 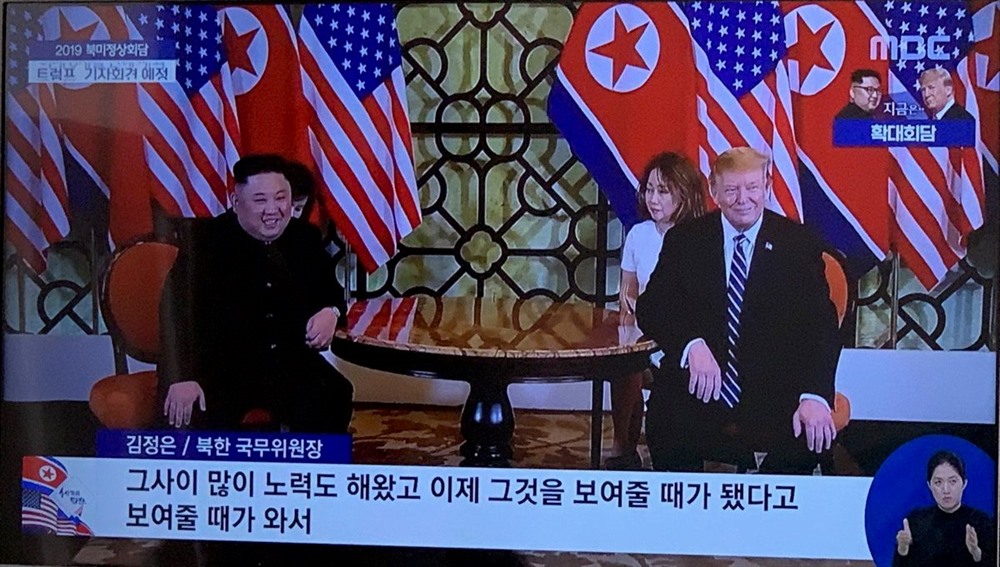 Penny for their thoughts? President Trump and Chairman Kim look pretty relaxed as they take a stroll around the garden of the Metropole Hotel. 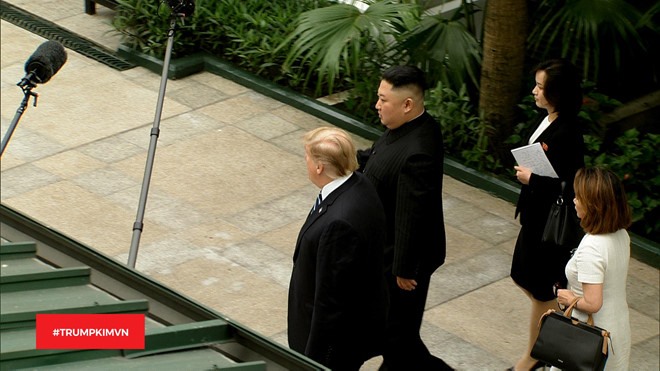 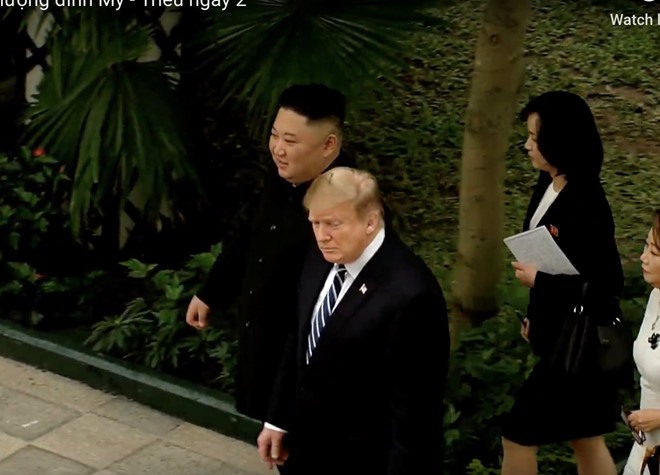 They say when in Rome, do as the Romans do. Well the same could be said for this Greek news journalist who reported from Hanoi wearing a traditional Vietnamese conical hat. 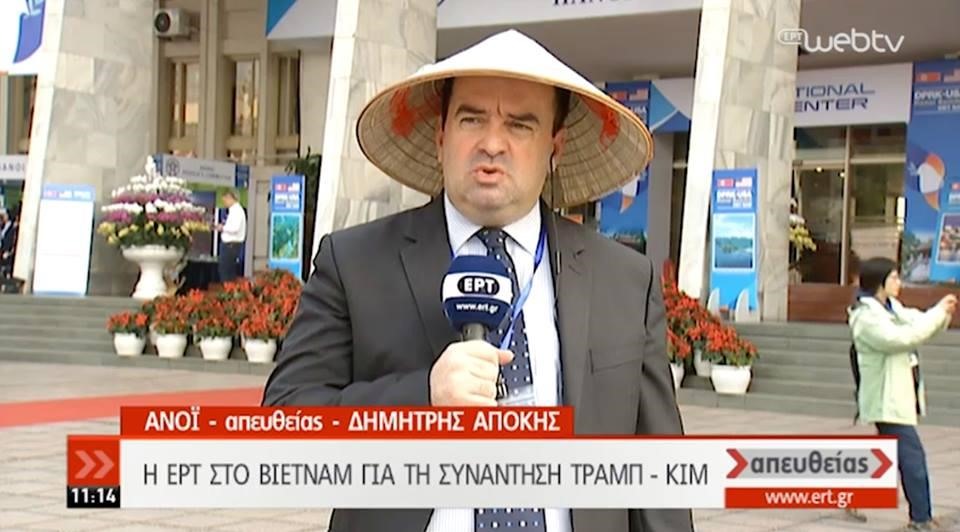 Here is the video of President Trump and Chairman Kim at a briefing before their meeting began.

While the two leaders are talking in a closed door meeting, journalists are busy reporting the event from the International Media Centre not far from where Trump and Kim are meeting. 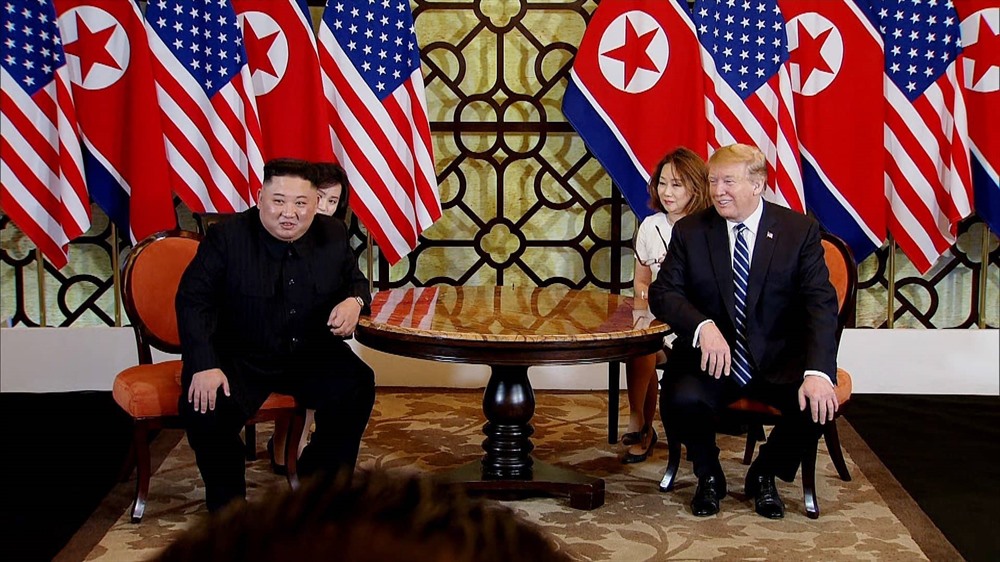 The two leaders have spoken to the press before their meeting at Hanoi's Metropole Hotel. Here's a summary of the highlights of what was said:

“I have been saying very much from the beginning that speed is not important to me. I very much appreciate no testing.”

“Speed is not important. What’s important is we do the right deal.”

“We’ll sit together and have a wonderful dialogue and I will do my best to bring about a wonderful result today.”

“It’s too early to tell but wouldn’t say that I’m pessimistic. For what I feel right now, I do have a feeling that good results will come out.” 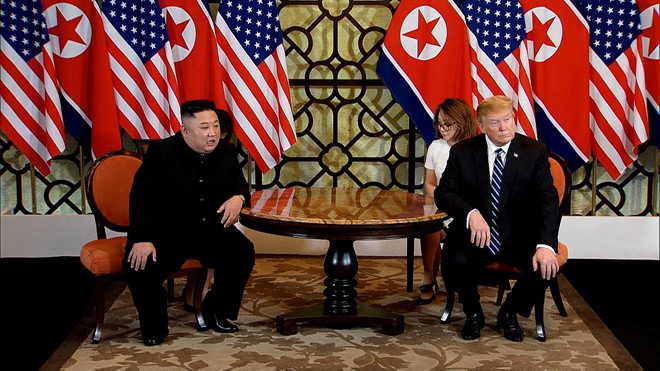 Chairman Kim has arrived at the Sofitel Legend Metropole Hanoi Hotel where the summit is taking place. Here's video of the two leaders arriving at the hotel.

The Beast carrying President Donald Trump has arrived at the venue for the first meeting. Chairman Kim has left his hotel. Here's video of Hanoi's streets before the summit.

Here's a selection of some front pages from around the world today. No prizes for guessing which one we think is the best! 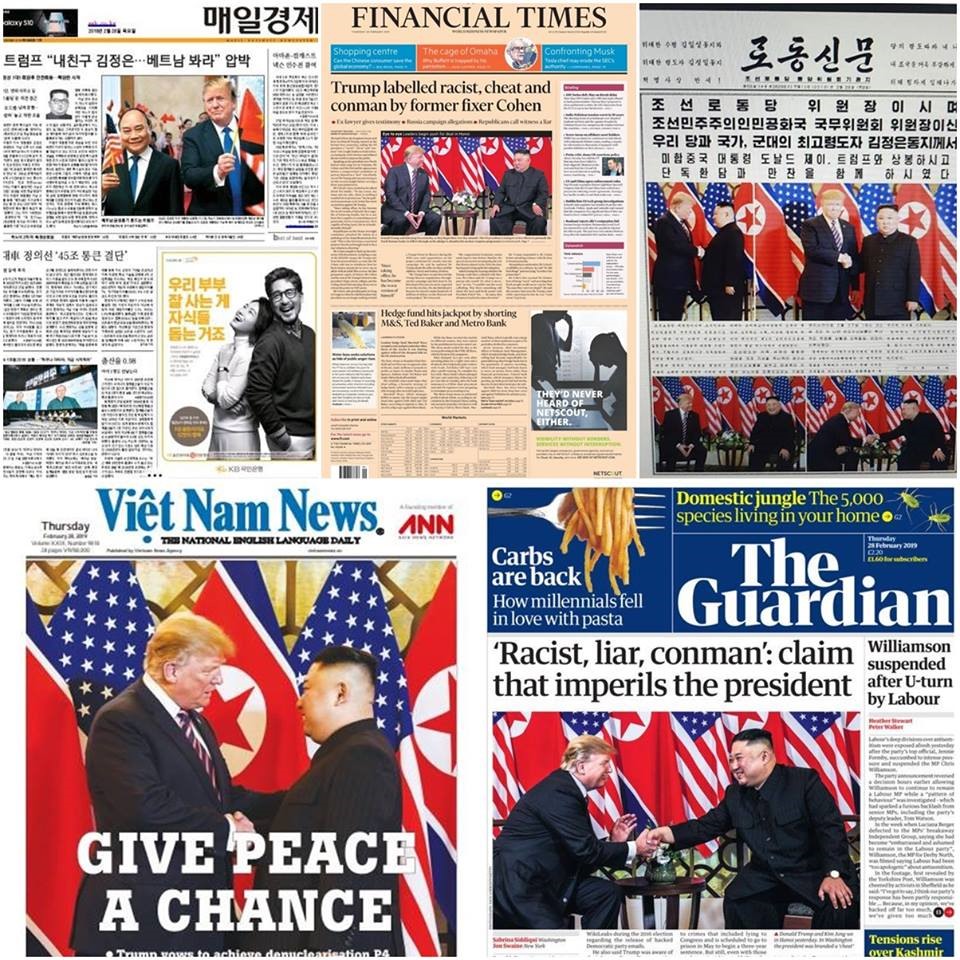 Maintaining peace on the northern border

Photos of war to defend northern border 40 years ago