VietNamNet Bridge - Deputy Foreign Minister Bui Thanh Son said that during the APEC Year 2017 event Vietnam is expected to welcome tens of thousands of delegates and organize about 200 events across the country, opening up great opportunities for localities, businesses and the public. 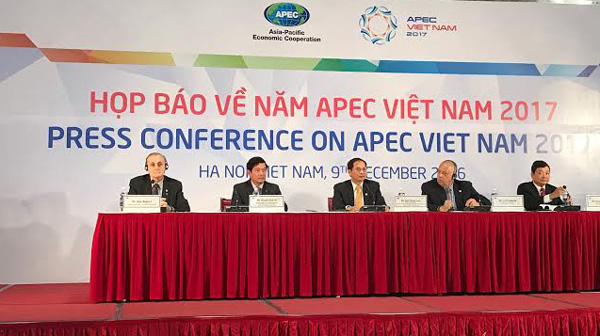 A press conference on the APEC Vietnam Year 2017 took place in Hanoi October 13, presided over by Deputy Foreign Minister Bui Thanh Son, Vice Chairman of the APEC National Committee of Vietnam, and Chairman of SOM APEC.

Attracting the participation of hundreds of experts, scholars, representatives of corporations, leaders of ministries, provinces of Vietnam.

The support of member economies for the direction, theme and priority of APEC Year 2017.

Agreement on the calendar of activities of the APEC Year 2017. Accordingly, 2017 will comprise nearly 200 events, of which the most important is the APEC Summit with the participation of leaders of 21 member economies, which will take place in November in Da Nang.

The ISOM’s highlight was the APEC forum with businesses that attracted the participation of APEC businesses, representatives of Asia Pacific Business Associations and domestic enterprises.

Finally, through the organization of this meeting, international friends recognized the readiness of Vietnam for APEC 2017.

According to Deputy Minister Bui Thanh Son, hosting the APEC Year 2017, Vietnam will have more opportunities to strengthen trade and investment relations with its partners in Asia and the Pacific, as well as create favorable conditions to complete the objectives of Vietnam’s Socio-Economic Development Strategy for the period of 2011-2020.

Regarding the expectations of Vietnam in hosting the APEC Year 2017, Mr. Son said that Vietnam has four big expectations: Practical contributions to the APEC process, making APEC cooperation more effective; Raising the position of APEC as a leading forum for economic cooperation, pioneering the emergence and deepening of regional connectivity, promoting peace, stability, cooperation and development; Strengthening friendship and partnership with APEC members; Advertising an innovative, dynamic, potential and active Vietnam; providing opportunities for development and exchange for regions, localities, enterprises and people of Vietnam.

Emphasizing the benefits of APEC 2017 activities to localities, businesses and people, Deputy Minister Bui Thanh Son said that as the host, Vietnam is expected to welcome tens of thousands of delegates and will organize about 200 events across the country, opening up great opportunities for local businesses and businesses to promote business, connection, attract tourists, promote images, and introduce their products to APEC partners and leading corporations in the world.

The people of Vietnam will have more opportunities to choose in many fields such as employment, goods, services, health, education and tourism thanks to the programs that APEC is implementing.