VietNamNet Bridge - The World Health Organization (WHO) has recently given a warning that Vietnam has particularly high levels of air pollution compared to other countries in Asia and the Pacific.

In Vietnam more than 50% of the days in the year have air of poor quality. Most recently, the US Embassy in Vietnam provided updated statistics at aqicn.org, a worldwide air quality monitoring data coverage website, which said that Hanoi is the second most polluted city in the world, based on air measurements at the US Embassy in Hanoi.

How is the pollution situation in Hanoi? What should we do to deal with this? VietNamNet talks with Mr. Hoang Duong Tung, Deputy General Director of the Vietnam Environment Administration. Thank you for joining us, Mr. Tung.

Hoang Duong Tung: Yes, in the past few days, we have observed the air quality at No. 565 Nguyen Van Cu Street, Hanoi and we have also found that the index of environmental pollution has increased. However, it is not true that air pollution in Hanoi is at the top of the world as the media has reported recently.

We have to understand that in environmental monitoring, there is a need for monitoring the air in many places in order to evaluate the air quality in a region rather than basing air measurement at a place, at a certain time, to evaluate the quality of a whole region or a whole day.

However, I would like to emphasize that, over the past few days our measurements have risen, and there are many reasons. I think that we need to have a proper view on this issue.
Reporter: Compared to the current safety threshold for the air, how many times have your measurements been higher than that?

Hoang Duong Tung: Our measurements at the peak hours were 1.5 to 1.6 times higher than the threshold. There were also times when the air was clean, as the measurements were much lower than the safety standard.

What does it mean? When evaluating air quality of a day, we have to rely on the average of 24 hours, not just the data we collect at a certain time and then we can say that that data is correct for the whole day. That’s what we should understand about air pollution.

VietNamNet: I wonder how long air pollution in Hanoi has existed. When did the air in the city begin to exceed the safety standards?

Hoang Duong Tung: In the five-year environmental status report, we noted that in the past 3-4 years, the number of days in a year when the air quality was measured with a safety level lower than the threshold is on the rise.

Air pollution like what has happened in some other cities as Beijing of China can happen in Vietnam, if we do not have the right measures.

Reporter: Do you worry that one day Hanoi will rank second in the world for air pollution?
Hoang Duong Tung: We cannot confirm the ranking but it is for sure that air pollution will increase and it is not common pollution but serious pollution. That is not arbitrary, but it is forecast based on our data through many years. And we can also see where the sources of pollution come from, and these sources do not decrease but tend to increase. 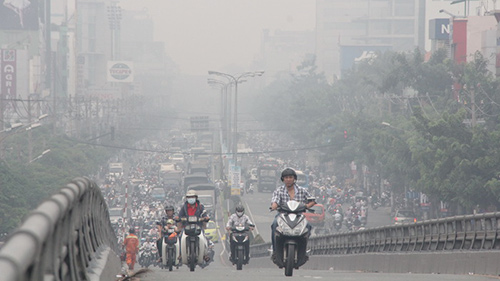 I say, for example, the construction activities in Hanoi is one of the causes of air pollution. Other causes are the increase of vehicles in the city like motorcycles and cars. Farmers in the suburbs burning straw is also a reason causing air pollution in Hanoi. We have tried to deal with these matters but we have not succeeded.

VietNamNet: As you have said, it is clear that environmental pollution in Hanoi is not a new issue. It has been going on for several years, but the solutions we have put in place to reduce the level of pollution are ineffective. So, how can we change the situation?

Hoang Duong Tung: Yes, the reduction of air pollution in Hanoi and in some cities in Vietnam have been discussed through many years but we have not seen the effect. Sometimes the issue is raised by the public when reports on pollution are released. However, we have done little to prevent it.

VietNamNet: Thank you for joining our interview today. Goodbye and see you again!