VietNamNet Bridge - In 2016, the consequences of climate change in Vietnam were evident with 10 typhoons and seven tropical depressions in the East Sea (internationally known as the South China Sea), more than the average of many years ago. Of these, four storms and two tropical depressions directly affected the mainland. 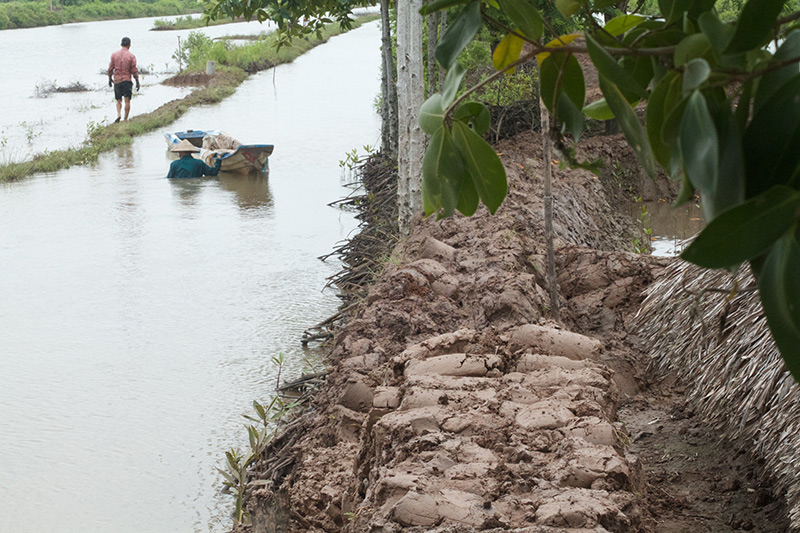 In 2016, Vietnam also experienced 24 cold spells. During the cold spell in January 1, 2016, 40 sites were reported with snow – a phenomenon that had not occurred in hundreds of years in many places. The cold spell on January 21st recorded the lowest temperature for 40 years, causing widespread snowfall and frost in the northern mountainous region.

Typhoons, downpours, droughts, and saline intrusion were complex, contrary to all rules, difficult to forecast. In 2016, 22 large downpours across the country devastated many homes and fields.

The 2016 also recorded 16 floods on the rivers in the Central Region and the Central Highlands. Serious, widespread floods were prolonged, causing severe flooding in Central Vietnam.

Material damage was also great, especially in the fields of agriculture, industry, infrastructure, health and the environment.

In 2016, the irregularities of the weather were increasingly severe, occurring throughout the country. Specifically, in the dry season of 2016, many places in the South and the Central Region suffered from drought due to the drop in rainfall by 30-40% and the small water flow of rivers, leading to saline intrusion coming one month earlier in the estuary areas of rivers in the central region and especially in the Mekong Delta, where the salty water entered 80-100 km deep into the mainland. In these areas, farmers were disturbed by salinity, and lack of fresh water for daily life and production.

In the central region, the rainy season and the floods came late but they occurred repeatedly and lasted longer than usual during the last months of the year, causing huge damage to property and people. In the North, the first cold spell came early compared to previous years, but people did not feel the cold air of winter as the cold spells alternated with hot days.

In the dry season, the South as well as Ho Chi Minh City saw out-of-season downpours. The number of rainy days and the total rainfall in the dry season also exceeded the average of the same period of many years ago. Out-of-season rain caused damage to the winter-spring crop as well as fruit trees.

According to weather experts, there were many causes, particularly climate change, that changed some natural rules. Meteorological experts said the weather was in the neutral period and tended to move to El Nino (often associated with drought), so the rainy season in the South arrived earlier than it had many years ago.

It is undeniable that the weather in Vietnam in recent years has become increasingly abnormal. Droughts, floods, landslides, and storms have seriously affected the economy, which depends on agricultural production.

In particular, Vietnam is considered one of the countries heavily affected by climate change due to its long coastline. If the sea level rises by 1 meter, 40% of the area of the Mekong Delta and 10% of the Red River Delta will be inundated, which will directly affect 20-30 million people. For Ho Chi Minh City alone, it is forecast to be one of the top 10 cities in the world most threatened by climate change. The strongest impact on the city is temperature, rainfall and tides. Flood in urban areas, sea water intrusion deep into the mainland, rising sea levels affecting production and clean water supply, infrastructure and people's life.

To cope with climate change, since 2015 Vietnam has had 61 urgent projects with total budget of VND19,000 billion. Priority projects in the medium term were approved by the National Assembly and the Government, totaling about VND15,000 billion, focusing on the construction of a system of freshwater reservoirs; development and protection of protective forests, watershed forests, and mangroves; investment in environmental monitoring systems, and hydro-meteorological forecasting systems; and moving people out of dangerous areas.

In the long run, to develop a low-carbon green economy and reduce greenhouse gas emissions as Vietnam committed in the Paris Agreement, the country needs huge investment. Therefore, we need to quickly study and promulgate appropriate policies and measures to promote the participation of the private sector, in order to increase investment in reducing greenhouse gas emissions and adapt to climate change, then gradually transforming the economy that now depends largely on non-renewable fuels to renewable energy, improving energy efficiency.

In Ho Chi Minh City, many policies and measures to cope with climate change and integrated in many areas such as planning, energy, transportation, construction, waste management, water management, and agriculture have been issued. Specifically, Ho Chi Minh City has been involved in the C40 (the organization of leaders of cities in the world that are committed to climate change mitigation and adaptation) and has taken part in activities to reduce greenhouse gas emissions.

Ho Chi Minh City is currently working with the Ministry of Natural Resources and Environment of Vietnam and the Japan International Cooperation Agency (JICA) to study and design legal institutions, and create a legal corridor to, step by step, implement the Paris Agreement 2015.

The city has also cooperated with Osaka (Japan) in a program to develop low-carbon cities and with the city of Rotterdam (the Netherlands) in the program "HCM City develops towards the sea to adapt to climate change".

According to the latest information, Ho Chi Minh City will be built into the first smart city of Vietnam, becoming a place that gives special attention to protect the environment for all people.