Prime Minister Nguyen Xuan Phuc met with Premier of Quebec Philippe Couillard on June 8 (Canada time), as part of his attendance at the Group of Seven (G7) Outreach Summit and visit to Canada from June 8 – 10 at the invitation of Canadian Prime Minister Justin Trudeau. 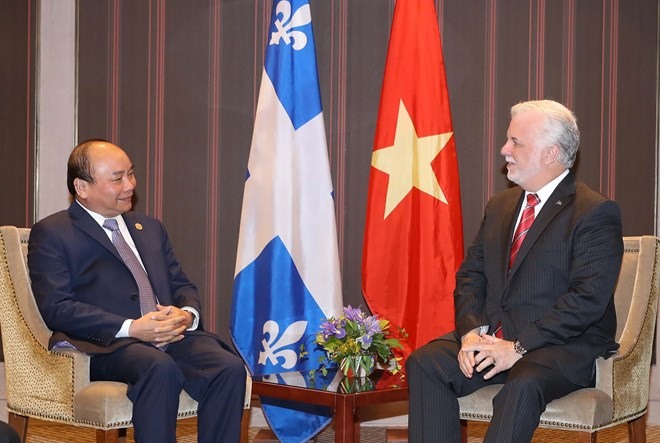 At the meeting, Phuc thanked for the warm welcome he received in Quebec and expressed his impression of the local diverse and strong growth.

Vietnam values cooperation with Canadian localities, including Quebec, placing it as  a priority in the two countries’ comprehensive partnership, stated the Vietnamese PM.

Couillard welcomed the Vietnamese high-ranking delegation’s attendance at the Group of Seven (G7) Outreach Summit and visit to Canada.

He said the establishment of the Vietnam – Canada comprehensive partnership in November 2017 is an important milestone in bilateral relations, serving as a drive to intensify friendship and cooperation between their localities.

PM Phuc asked Quebec’s authorities to facilitate the involvement of Vietnamese expatriates here in the local development and bilateral ties between Vietnam and Canada.

The Premier of Quebec vowed to continue promoting cooperation expansion and academic exchange via the establishment of partnerships and student exchange programmes.

He pledged to create best conditions possible for Vietnamese expatriates to make contributions to bilateral relations.

Philippe Couillard requested Vietnam consider Quebec’s proposal to set up a representative office in the country.

PM Phuc took the occasion to invite the Quebec Premier to visit Vietnam, which was accepted.

PM Phuc also introduced to Canadian businesses the dynamic Vietnamese economy with improved investment and business environment and abundant opportunities for foreign investors while addressing the Vietnam-Canada business forum in Quebec on the same day.

Vietnam has recorded high economic growth, with import-export revenue reaching US$425 billion, foreign investment hitting US$37 billion in 2017, he noted.

The Vietnamese leader said that foreign investors in Vietnam have satisfied with the investment efficiency in the country, especially the opening of the economy with the engagement in various free trade agreements.

In March this year, Vietnam and Canada signed and are undertaking procedures for the ratification of the Comprehensive and Progressive Agreement for Trans-Pacific Partnership (CPTPP). Under the deal, Vietnam commits to removing nearly 100 percent of taxes, which means many Canadian goods will enjoy tax reduction and exemption in Vietnam.

The PM added that Vietnam is restructuring State-owned enterprises, including those in important areas such as aviation, power, oil and gas, telecommunications, and transport infrastructure. This is a good opportunity for foreign investors, including those from Canada and Quebec city to buy shares and become strategic shareholders.

He cited a multinational solar power plant with a capacity of 168 MW and an investment of $150 million that has been launched recently in Ninh Thuan province as an example of potential for cooperation between Vietnam and Canada.

He affirmed that Vietnam considers Canada as an important partner in the American continent, holding that the two economies can suplement each other without competition. Particularly, Vietnam has a strong agriculture sector and many industrial products, he said.

He said that the current trade revenue between the two countries at $6 billion and Canada’s investment of $3.5 billion have yet to show the capacity of Canadian investors in Vietnam. He stressed that the two sides should work harder together to improve the figures in the coming time.

Vietnam is calling for more quality investment, especially in high added value products in global chains and environmentally -friendly ones, focusing on areas of infrastructure, renewable energy and high-tech agriculture.

The PM said that Vietnam has a golden population with 60 percent of labor force being young labourers. Each year, the country exports a large number of labourers trained in foreign languages. As a member of the Francophone, along with English, Vietnam has strengthened French language teaching with an aim to create high quality human resources serving socio-economic development in the future, he stated.

Meanwhile, Vice Governor of Canada’s central bank Vincent Joli-Coeur spoke highly of reform of Vietnam over the past 30 years, while giving optimistic comments on the economic outlook and investment opportunities in Vietnam.

He said that among countries that the bank has presented in, Vietnam ranks first in terms of the opening for foreign investors, adding that Vietnam has met criteria in both infrastructure and business ethics.