VietNamNet Bridge – International organizations, in the reports released consecutively in November, showed the worrying situation of the Vietnamese workforce.

It is difficult for employers to find capable candidates 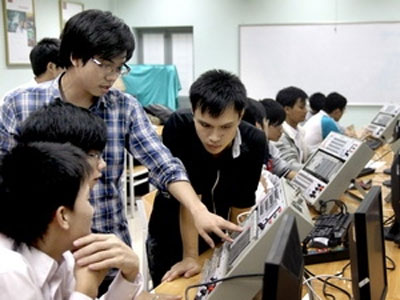 The Vietnam Development Report 2014, titled “Skilling up Vietnam: Preparing the workforce for a modern market economy” released on November 29 pointed out that the technical skill development system in Vietnam is not perfect due to the lack of the connection among universities, vocational schools and businesses, workers and students.

Meanwhile, in Vietnam, a lot of companies cannot find enough workers who have suitable skills. The lack of necessary skills can be seen clearly in the candidates seeking technical, professional and management jobs.

The report shows that Vietnam’s education system has a strong track record in producing foundational reading literacy and numeracy skills, but faces greater challenges in producing the advanced skills that will be increasingly demanded in coming years.

Christian Bodewig, the report’s lead author, noted: “These new jobs can already be found in today’s labor market, but Vietnam’s employers struggle to find the right workers for them.”

A half of workers need retraining

The 2014 White Book released by EuroCham, which shows the common viewpoint of the organization’s members about the issues of the Vietnamese business environment in 2013, pointed out that the information technology firms in Vietnam have to spend big money to train new school graduates in English, soft skills and career skills.

Meanwhile, a recent report by the National Information and Communication Institute said that 70 percent of new graduates have to undergo retraining courses to satisfy the requirements of the jobs.

The companies emphasized that the lack of the qualified labor force is the biggest problem which makes it impossible to make bigger investments in Vietnam, or, in some cases, have to choose another country in the region.

Vietnam now is on the bottom half of the ranking about the ASEAN labor force development in the 2014 White Book.

Reform or lag far behind

Minister of Planning and Investment Bui Quang Vinh, speaking at the National Assembly’s working session on October 24, warned that if Vietnam does not carry out the strong, fierce and urgent innovation, it would lag far behind the other regional countries, including Cambodia and Laos.

“I believe that Vietnam’s biggest asset is human source. But how has the asset been used?” Vinh questioned.

The minister said he cannot employ an excellent candidate, a man with doctorate, though he knows the candidate is capable to undertake the jobs of many workers.

“I cannot recruit him, because I cannot pay him VND50 million a month as he is paid. And I will be sued if I dismiss some officers and employ him instead,” he complained.

“How can we build up good policies, if the state officers are not qualified enough?” he questioned.