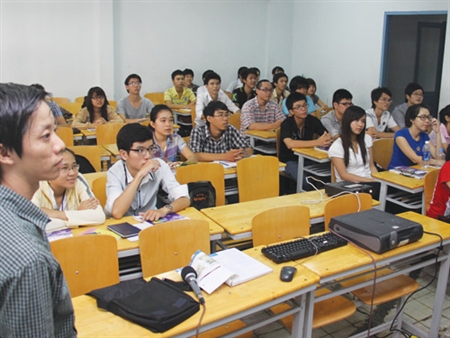 The HCM City Economics University is one of a few schools which require their students to submit international English certificates when finishing the school. Since 2009, the school decided that all the school’s graduates must have TOEIC 450-550 certificates.

According to Nguyen Van Duong, Deputy Head of the Training Division, students can study English at the school to obtain 8-12 credits. Later, they have to show TOEIC certificates with the required marks, or equivalent English certificates to be able to graduate the school.

“The school does not come forward and organize exams for students. We only request students to submit English certificates to ensure the objectiveness and the quality,” Duong explained.

The HCM City Agriculture and Forestry University in 2008 set a requirement that graduates must have the English skill equal to B1 in the Common European Framework of Reference for Languages (CEFREL).

The Finance – Marketing University also organizes final exams and grants the papers confirming the students’ English skills. Since 2009, the school’s graduates must have 405-450 TOEIC certificates.

Since 2012, the HCM City University of Technique Education has required TOEIC 450 certificates for graduates. Prior to that year, students just need to have TOEIC 350. After finishing general and specialized English training courses, students have to attend an exam to get certificates about their English skills.

Dr. Vu Thi Phuong Anh from the Association of Non-state owned Universities and Junior Colleges, noted that it is unreasonable for schools to come forward to organize exams and recognize English skills in accordance with international standards.

“As the exams are organized by schools, not by independent organizations, the exam result may be unreliable,” Anh said, adding that no one can confirm the “international standards” in this case.

Anh said that in order to be recognized as having “international standards,” students need to attend the English exams organized by international organizations.

The president of a university in HCM City said at the exams in accordance with international standards, examinees’ papers would be sent abroad to be marked, while both examinees and exam organizations must follow the strict required procedures.

He admitted that in fact, schools can only confirm that students can meet certain requirements in English skills. In many cases, the recognition by the schools is not valued by employers.