VietNamNet Bridge - Automatic convenience stores, automatic vending shops and robot-waiters at cafes do not exist only in developed countries. They have also appeared in Vietnam and are designed by Vietnamese. 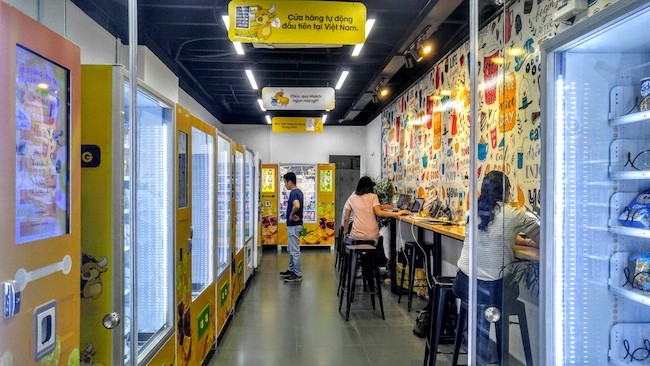 The first automatic shop in Vietnam

In late December 2017, in HCMC, the first automatic shop with no seller or check-out counter opened. At the shop, buyers select products on a touchscreen and ‘wave to pay’ with QR code technology.

The company that owns the shop said that, after its first shop on Mac Thi Buoi street, it will open 2,000 more shops of this kind throughout the country.

In Hanoi, a smart car parking service has for the first time been set up in some areas of central business districts. With a smart car management app, one can easily control empty spaces and make payment for services quickly.

Robots have also appeared at cafes and restaurants in Vietnam. A made-in-Vietnam robot at a café in Hanoi serves hundreds of clients within 15 consecutive hours, stops when meeting barriers and brings drinks to customers.

In HCMC, Co Ba (Ms Ba), a beautiful robot has been put into use at a restaurant on Nguyen Hue street in district 1. Co Ba can greet, introduce dishes, take orders and move to bring food and drinks to diners.

In the e-commerce sector, chatbots are becoming more popular. It connects with applications on electronic devices to fulfill users’ requirements through natural language.

The 4.0 revolution has indeed come to Vietnam. In 2017, Vietnamese for the first time heard that hundreds of factory workers lost their jobs to robots.

The director of a chemicals company in Vietnam affirmed that the risk of workers being replaced by robots is realistic.

“My company will have only hundreds of workers in the future who work in automated offices,” he said, adding that the 20-year-old detergent production line at his factory in Long Bien district will have 10-15 workers instead of 100 now.

A company in Binh Duong province has completed necessary steps to put 20 robots into use on the paint production line.

An analyst said the tendency is increasing all over the world. In Taiwan, Foxconn has dismissed 60,000 workers, or half of the total number of workers and replaced them with robots.

At least 20 large companies globally are making the same changes. And a similar story may happen at Samsung, which employs 100,000 people in Vietnam.

Eye to the future