VietNamNet Bridge - As the owner of a hospital, securities company, bank and large properties, Tram Be, the banking tycoon, and his family amassed a huge fortune until the day he was arrested. 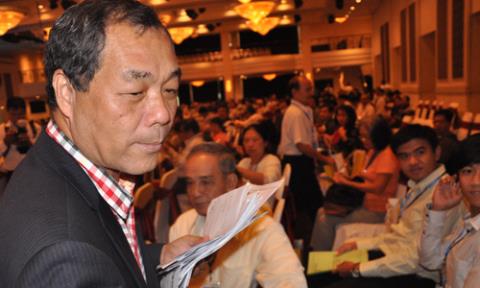 The police on August 1 issued a decision to prosecute and arrest Tram Be, former vice chair of Sacombank, for ‘deliberately violating State regulations on economic management, causing severe consequences’.

Be was famous for his wealth before the arrest. He held 27.6 million Sacombank shares (STB) which had market value of VND352 billion, and 2.65 million Binh Chanh Construction Company’s (BCI) shares, worth VND77.3 billion.

Be held the post of deputy chair of the Phuong Nam Gold, Silver and Gemstone Company (NJC) which has charter capital of VND450 billion. He was also a member of the board of directors of private Trieu An General Hospital.

Kieu also holds 5 million NJC shares. However, as the company doesn’t list shares on the bourse, it is difficult to assess the value of the shares.

As such, if considering the stock assets in BCI and STB, Be and his family members own nearly VND2 trillion.

Be stepped down from the post of deputy chair of Sacombank on November 11, 2015.

In 2009, he spent $64 million to buy a part of Vallco Shopping Mall in Cupertino, California in the US.

Sources said that US companies tried to negotiate with Tram Be for many years to buy Be’s stake in the shopping mall, but they failed. The companies included Apple. In 2014, Be decided to transfer the property to partner Sand Hill.

The sources said after paying tax of $36 million, Be brought $80 million to Vietnam, which means he made a profit of $16 million after five years.

Being an influential banker and rich man with investments in real estate, Be spent a huge amount of money to build his house, the biggest of its kind in southern Vietnam.

His building in his home village in Tra Vinh province was designed like a magnificent palace and decorated with expensive items.

Sacombank’s Tram Be forced to go