VietNamNet Bridge - The high growth rate of Phuc Long is just one example that shows the strong rise of domestically owned café chains, where Vietnamese like going to foreign-owned Starbucks or Coffee Bean & Tea Leaf. 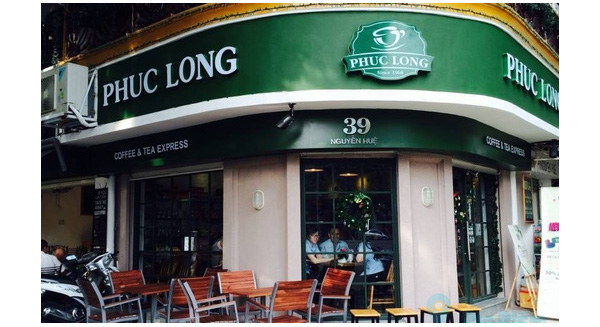 It was a Saturday morning. The Phuc Long café in Tan Binh district, HCMC was crowded. Huy, a loyal client of Phuc Long, was seen reading newspaper and sipping a cup of ice milk coffee.

Huy said he came here nearly every morning. “The price is reasonable. The shop is near my house. The coffee is strong and there is no artificial flavor,” he explained.

Phuc Long, a brand from Bao Loc district of Lam Dong province, appeared in Vietnam in 1957. In the past, Phuc Long only set up shops where it sold and introduced products.  But it has changed business strategy, opening a series of shops in  advantageous positions in HCMC.

Phuc Long shops appeared in HCMC just a short time after Starbucks set up its first shop there in 2013, a move which in analysts’ eyes means that Phuc Long ‘declared war’ with a giant from the US.

In district 1 alone, Phuc Long has eight cafes. It also has other shops in districts 3, 7, 5, Phu Nhuan and Tan BInh, while it plans to open the 16th shop at Aeon Mall Binh Tan this July.

All Phuc Longs are located in advantageous positions, either in the central area or densely populated areas and the areas with heavy traffic. Phuc Long is in no way inferior to Starbucks. On Ly Tu Trong street, for example, there is one Starbucks and one Phuc Long, not far from Starbucks.

Phuc Long, like Starbucks, also has green and white color on its logo. And its shops also have modern design. However, the selling prices are much more attractive with diversified menu, from tea, coffee to fruit juice and food for breakfast.

A worker from Phuc Long said that there are two types of shops. One is Take away express, targeting popular customers. A cup of medium-size ice milk coffee is VND30,000, while a cup of hot coffee VND28,000. Meanwhile, Take away house, with three shops at Crescent Shopping Mall, Vivo City and Aeon Binh Duong targets high income earners and has higher selling prices.

A survey conducted by Financial Times Confidential Research in 2015 on 1,000 consumers in five largest economies in ASEAN, except Singapore, found that Vietnam is the only country in the region where Starbucks is not in the high position on the list of the most visited coffee chains.